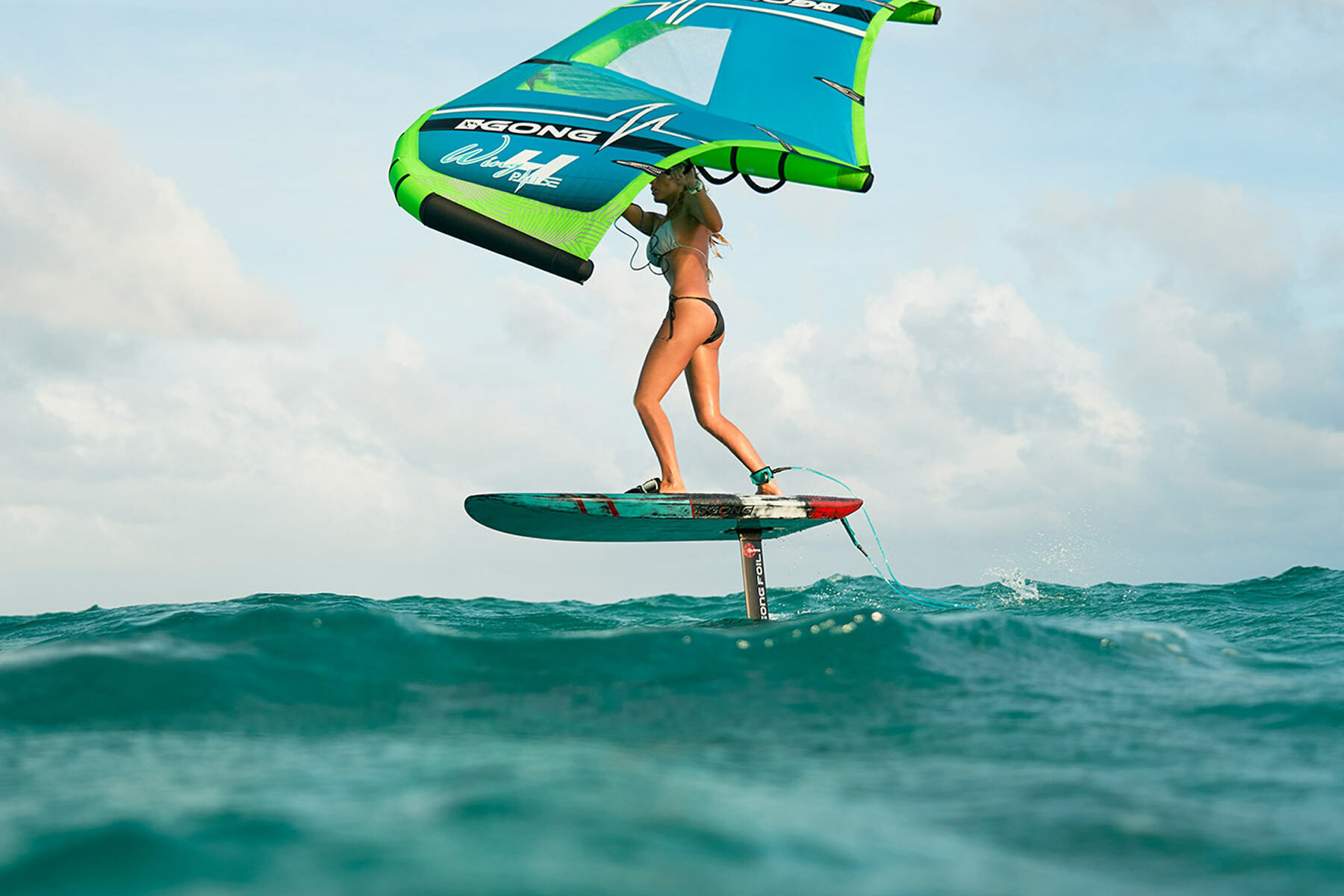 EVERYTHING YOU NEED TO KNOW ABOUT WINGFOILING

A BEGINNER’S GUIDE TO WINGFOILING

INTRODUCTION: WHAT IS WINGFOILING?

Wingfoiling (also called wingsurfing or winging) is an exciting new watersport that is quickly gaining traction among water sports enthusiasts. It is a combination of surfing, kiteboarding, and windsurfing, with the addition of a large inflatable wing.

Unlike other watersports, Wingfoiling does not require the rider’s board to be in constant contact with the water’s surface while using their body weight to control the speed and direction of the board. This makes it an exciting and unique way to explore the ocean or any body of water.

With its fast learning curve and accessibility, Wingfoiling has become a popular alternative for those looking for an adrenaline rush or just something different from traditional watersports. Many people coming into the sport of wingfoiling come from a background of kitesurfing, windsurfing or surfing. The feeling of riding on a foil can be best be described as hovering over the water on a magic carpet.

WINGFOILING GEAR: WHAT DO YOU NEED

Wingfoiling is an exciting new sport that requires the right gear and preparation to ensure a safe and enjoyable experience. Here we break down the gear that is needed to get you into Wingfoiling

This is the part you hold in your hand. 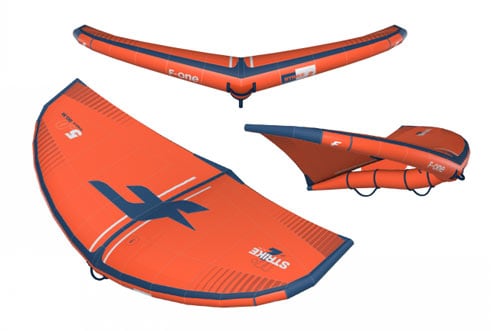 When it comes to wings, it’s important to understand exactly how they work and how much power they need in order to get up on the foil. Generally speaking, if you’re a beginner, you’ll want to start with a bigger wing in lighter winds. For someone up to 70kg or 155lbs, go for a 4m version and if you’re heavier than that, opt for the 5m variant. Other factors to consider when choosing a wing include its handles (soft vs hard) and leash attachment (on your wrist or waist). The best way to decide is by demoing different wings so that you can find the right setup for you!

The Wing is inflatable and has an inner tube. Inflating the wing is done quickly with a kite pump via 1 valve. Defalting and packing up the wing takes 2 minutes and they roll up into the size of a normal backpack, which makes them easy to travel with. To prevent you from losing your wing when you fall, the wing is attached to your wrist with a leash. Manufacturers make different size wings varying in sizes from 3 m2(square meter surface area) to 8 m2. The wings have a good variety of wind ranges so 1 wing size will do for most people. Popular brands are Naish, Cabrinha, Fone and Neil Pryde and all have their background in either windsurfing or kitesurfing. 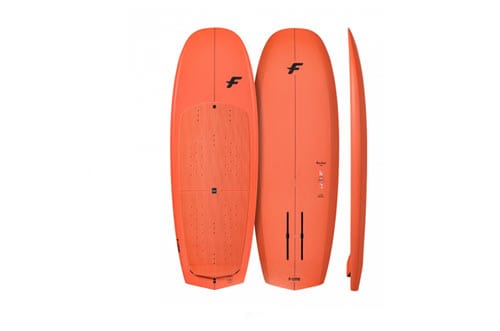 Some wingschools give their first lessons on Stand up Paddle boards with a regular surf fin, without a foil under neath.

Most boards have large EVA deckpads to give your feet grip and might have inserts to attach footstraps. Footstraps are generally not used for beginners.

The board will be attached to you with a leash that goes to either your feet or your waist.

Prices of wingfoil boards start at 500USD to 1500USD new. 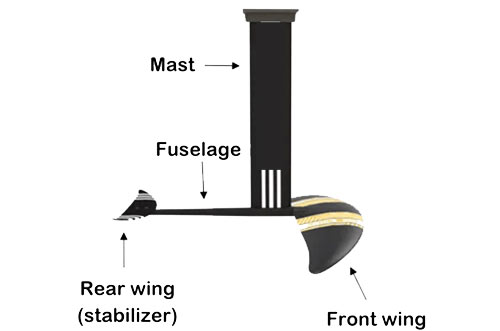 This is where the magic happens!

Basically a surf foil is the water version of the wings of an airplane, with an airplane the fast air that hits the front wing gives it upward lift. the smaller rear wing balances that lift downward so it becomes stable. With surf foils exactly the same principle applies. The front and back wing start engaging in lift when water hits the wings at a certain speed

Terminology of the different parts of the foil

Mast: Usually around 70 cm in lenght

Fuselage: Connects the mast with the front and rear wing

Rear wing (also called stabiliser): Stablises the wing and is a lot smaller than the front wing

Materials used in the foils: there are 2 different materials used in the construction of a foil for surf or wingfoiling: carbaon and aluminium. carbon is the more epxensive of the 2, because it requirers less maintenance ( no oxidation) and is stiffer at a lower weight. Aluminium is more budget friendly but because they are less stiff, means lower responsiveness. Some companies make a combination of the 2 materials: an Aluminium mast and Carbon wings and fuselage.

Wingfoiling is a safe sport, ones of the reasons wingfoiling is so accesible to people of different ages and abilities is to instantly ‘depower’ the wing. Meaning you let go of the wing and the power is immediatly reduced to zer, reducing the chance of injury. With kitesurfing you are more attached to the kite and if something goes wrong a safety mechanism has to be activated to release the power.

The part that is the most harmfull in wingfoiling, or any kind of foiling is, you guessed it, the foil. Knocking any body parts against the sometimes sharp-ish edges can result in a bruise or a scratch.

that is why people wear a helmet and an impact / flotation vest when learning to wingfoil, and even advanced and expert riders wear these.

One of the reasons wingsurfing is now one of the fastest-growing watersports is that the sport is accessible to most people between 10 and 70 years old. Prior watersport experience is not required. Another reason for the popularity is that progress is very quick, people can go from zero (no experience) to hero (riding upwind on foil ) in days. Here at Swell we have taught people wingsurfing with no experience and they were confident on foil in 3 days with around 6 hours of lessons.

DAY 2: Learning to stand up on the board and using the wing to sail out and come back to shore.

DAY 3: Getting enough speed standing on the board to start engaging the foil. First short ‘flights’ on foil.

DAY 4: Getting longer time on foil and start learning and using pumping techniques to get you on foil quicker.

Windfoiling can be domne at lots of places arround the world, you need wind and water

What does a destination have to offer to make a good wingfoiling destination:

– A large area of open water (minimum depth around 1 meter or 3′). Lakes, rivers, or open oceans.

– Stable Winds (minimum wind of 10 knots or 3 Beaufort), ideally side or side onshore winds.

– Sandy shore to start from.

One of the reasons that Cabarete, the Dominican Republic is so popular for people learning wingfoiling is that we have the ideal conditions: For beginners the wind is usually light of around 8 to 12 knots between 11 in the morning and 13.00. After that the wind picks up to 16 to 18 knots which makes it perfect for the next stages of your wingfoiling progression.

Already know how to wingsurf? Cabarete offers worldclass conditions for advanced and expert riders: the gentle rolling waves at the outer reef at Cabarete Bay are ideal to de-power the wing and hone your surf foiling skills.

Rides of over 100 meters long are easily possible

The wingsport is not just for foilers to enjoy, since the sport started several years ago variations have already popped up.

So you can keep practising and enjoying your wing even if the season doesn’t allow you to go on the water.

Getting into wingfoiling is also a great entry into other aspects of foiling such as SUP Foil, Surf Foil and even Kite and Windsurf foiling.

ABOUT SWELL AND WINGFOILING

In 2022 we started offering learn to wingfoil packages to Swell clients, and it has been received with great enthousiasm from our clients. Many do the learn to surf course in the morning and learn wingfoiling in the afternoon.

At Swell we have been open since 2009 teaching 1000’s of people the sport of surfing, with our learn to surf & yoga Retreats.