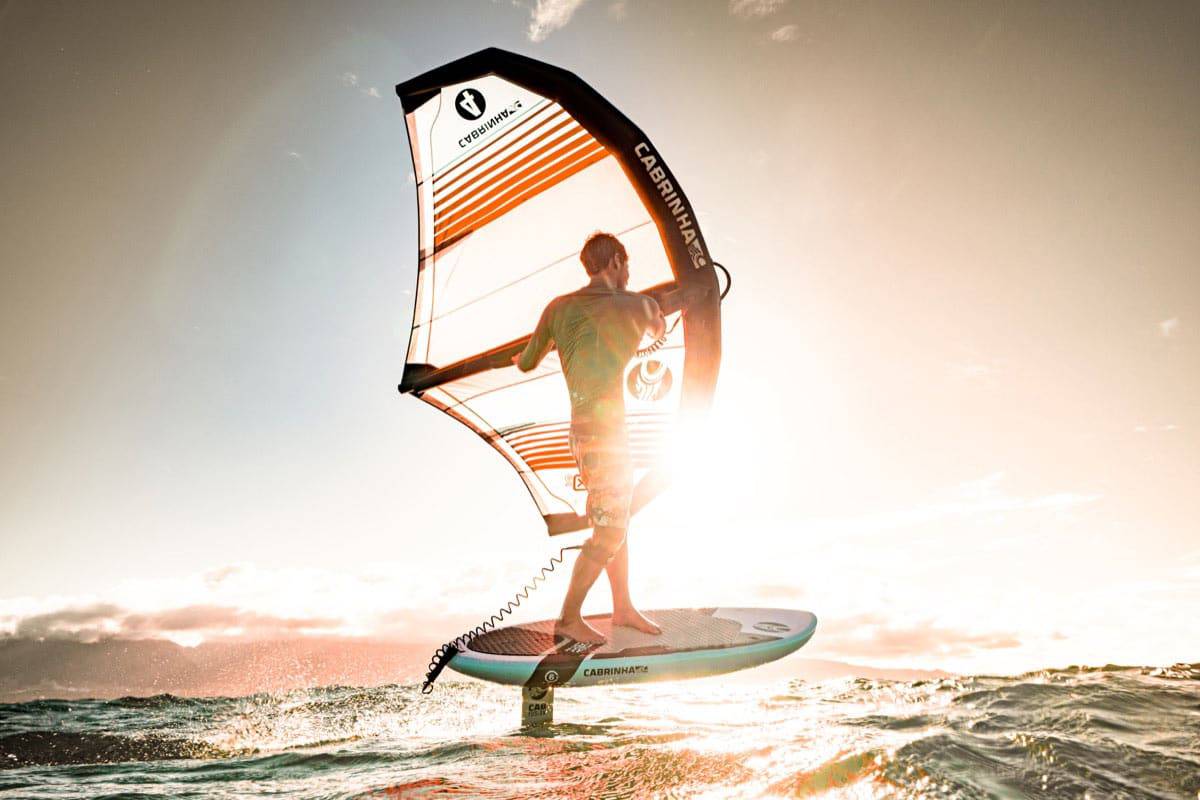 AN INTRODUCTION TO FOILING 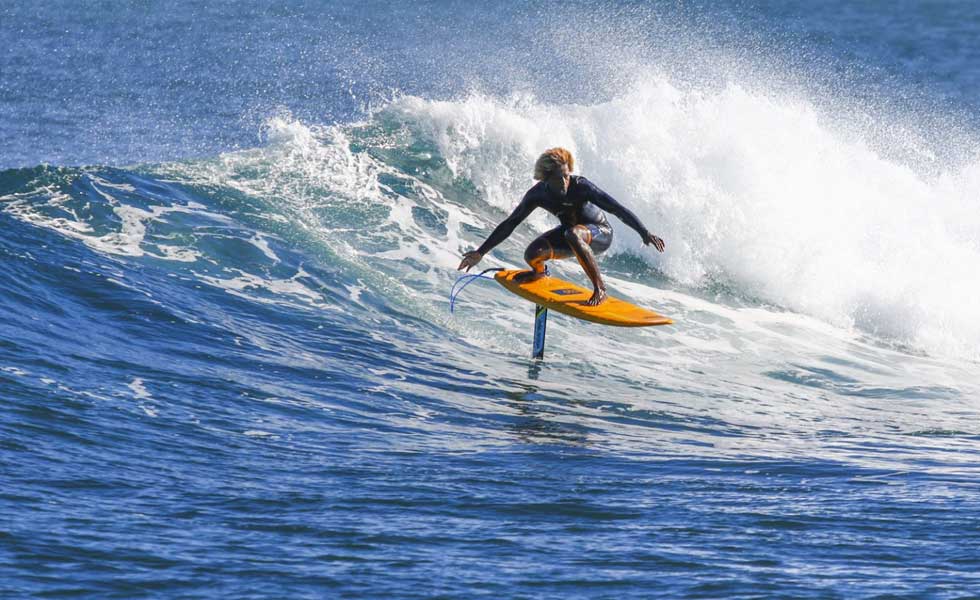 Unless you haven’t been paying attention to new water sports crazes, you’ve probably seen a huge increase in the number of people getting into foil boarding; whether it’s using a foil for surfing, kitesurfing, or the relatively new wing-foiling (covered in more detail below).

WHAT IS A FOIL?

It was in Hawaii that the hydrofoil was first developed. The idea is to use a blade below the water to ‘lift’ the board you are using (whether it’s a SUP, kiteboard, or surfboard) clean out of the water. The board is attached to a mast which is attached to that blade. Once the blade lifts at a certain speed, the mast comes out of the water and then no part of the board is actually touching the water. We will talk about how foiling feels a little later in this article; the very reason for its existence is how that ride feels.

Early foil models were heavy, extremely difficult to use, and really quite dangerous. These hand-made foils were also very expensive. After several manufacturers came up with various foil models over the years, in around 2014, foil models had improved and started appearing in more numbers on local beaches. However, they were still too fast, generally unstable and very difficult to ride, as well as being expensive. Accidents were common and often resulted in nasty injuries.

The speed of design improvements has been impressive and the good news is that today, all manufacturers are building easy to use, less expensive, stable, fun foils which suit all kinds of surf/water conditions. They range from inexpensive plastic foils, through aluminium and fibreglass construction, all the way to the top-of-the-range carbon fibre foils.

Even better, many are of a modular design, meaning that you can interchange the various parts as your level of foiling improves.

HOW DOES IT FEEL TO FOIL COMPARED TO RIDING A NORMAL KITEBOARD OR SURFBOARD?

This question is rather like trying to describe how it feels the first time you ride a wave; it’s really hard to put it into words.

It’s like no other form of board riding you have ever undertaken before. The reason for this is that you are simply floating: Imagine gliding over a sea of soap suds where the suds keep you on top without sinking yet you can’t feel them beneath you. Your foil makes no sound at all as it carries you, there’s no slapping of water that you always get with a board in contact with water. It’s spookily quiet as you glide effortlessly through the water. People have described it as a magic carpet ride and I would have to agree.

Also, the momentum of foils and the way they travel through water means that you only need light winds for either kiting or wing-surfing. You can also travel at much faster speeds and turn further upwind or downwind than you can with a regular twin-tip kiteboard.

It’s really easy to see why kite foiling and wing-surfing are the fastest growing water sports.

If you are used to riding a twin-tip kiteboard or a directional surfboard, you will know that you steer the board using your heels and toes. Only two things to remember; heels will dig in to ride upwind and toes will turn the board downwind. Let’s refer to this as the ‘roll.’

With a foil, there are three things to master. You’ve got the toe and heel operation (the roll) but you have also got a front and back axis (the pitch) to deal with. Getting the ‘pitch’ of the foil right is essential to keep the board out of the water. Too much leaning back and the foil will literally fly out of the water. Too much pressure forward and the foil will sink the board. Foils are sensitive and require only a tiny movement of your body forward or backward to completely change momentum.

The roll is also harder to come to terms with on a foil. If you can imagine the roll on a regular board occurs immediately beneath your feet and the adjustment you make results in an instant turn. With a foil, the blade is well beneath you, anything from 40cm to 110cm (depending on the length of the foil’s mast). This means that the adjustment required is larger and the turn takes longer to effect.

Then we have to look at how weird it feels to be hovering above the water. Everything you have ever learned with kiteboarding or wind-surfing is about the board being in direct contact with the ocean. The height you can achieve with a foil is at once exhilarating but it’s also scary. No matter how good you are as a kiteboarder, surfer, or windsurfer, learning to foil will make you feel like a noob all over again. It sounds like a bit of a nightmare, doesn’t it? But the reward, the reward………..your soap-suddy, dreamy cruise through the air will make all the faceplants and aching thighs well worth it. It’s just a learning curve you must go through to get to the pot of gold.

HOW DO I LEARN FOILING?

There are several different ways to learn to foil. If you already kitesurf well, then you can pick up foiling using your kite skills to generate the power required. If you are an accomplished windsurfer, then moving to wing-foiling will not be too big a step up.

If you don’t kitesurf, surf, or wind-surf already, then your options are as follows: 1. Learn to kitesurf first using a regular twin tip (this might sound difficult but actually, the learning curve with kiting is much faster than with regular surfing and progress can be rapid. 2. Learn to wing-foil (see below for our course options at Swell). The great thing about using the wing to start foiling is that control of the wing is easier and even faster to master than control of the kite. 3. Use a boat-tow to start. However, whilst using a boat to tow you might seem like a good option, in reality, it’s cheating somewhat and with this method, you won’t utilize some of the balance skills which are vital for foil control once a boat is not towing you. Another problem with a boat tow is that the boat tends to do the steering for you, so you are not learning that skill either. Lastly, unless your boat pilot is well-versed with foiling themselves, they won’t know the correct speed to keep you above the water and safe.

Whichever method you choose, you should begin your water experience with a short mast on the foil (shorter = easier). The better you get, the longer you want your mast to be. You will also use a bigger board at the beginning to give you as much stability as possible.

WINGSURF FOILING; A PERFECT INTRODUCTION TO FOILING WITH NO PREVIOUS EXPERIENCE

As we’ve mentioned above, wingsurf-foiling is an ideal choice if you don’t already kitesurf and you want to get straight into riding a foil. Wingsurfing is growing quickly in popularity and it’s easy to see why.

Unlike a kite, the hand-held wing is much simpler and safer to use. There are no long lines to put out, no potentially dangerous launch to master, no risk of crashing the kite and not being able to relaunch it. The equipment is easy to put together and the wing is quickly inflated. A leash attaches the wing to the rider in case of falls and handles are positioned along the center of the wing to guide it; it’s very light in the hand. In fact, there are no discernible disadvantages to using a wing to foil.

Wings are sold in various sizes to suit wind conditions and rider size. A good wing-foiling school will have the correct size of the wing for your lessons. You will be able to wing-foil in just 12 knots of wind. All you have to do is inflate the lightweight wing and enter the water.

WHERE CAN I LEARN TO WINGSURF / FOIL 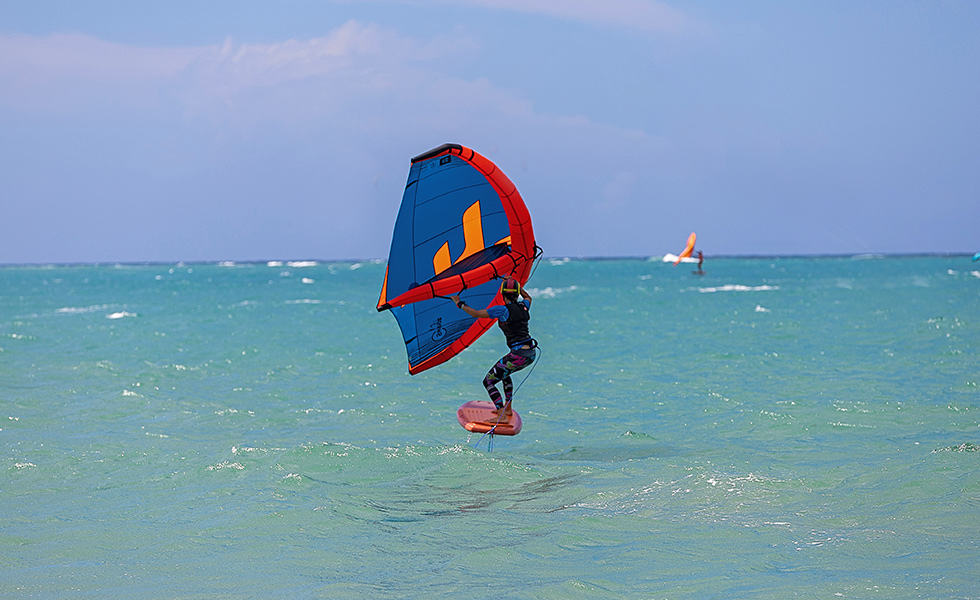 Cabarete, Dominican Republic, is already a world-renowned kite surfing destination, with steady side-on trade winds and warm Caribbean water: Now foiling is taking over as the fastest growing sport. You can come and stay with us at Swell and take a 10-hour foiling course for $795 USD (one person) or $636 USD each if two guests are learning at the same time.

Cabarete on the North coast of the Dominican Republic is one of the best wing foiling spots in the world!

Great conditions for Wing foilers of all levels

We are a purpose-built retreat for people that are looking for an active water sports holiday. We offer learn to surf, kitesurf and wingsurf packages for clients staying with Swell

More info about learning wingfoiling, or the wingfoil packages we offer