Ideal for all kiters

Cabarete has long been known in the kite community as one of the best (if not THE Best) places in the world to kitesurf.

Ideal learning to kitesurf conditions for beginners, to advanced kitesurf spots for intermediate and experts kitesurfers 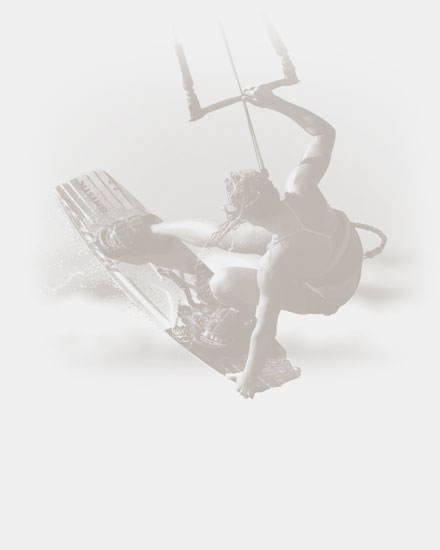 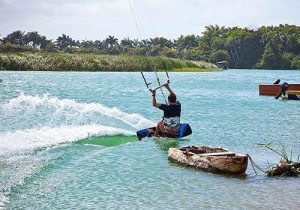 Cabarete is known worldwide as one of the kitesurfing meccas in the world. Many of the past and current pros on the world tour call Cabarete their home for 6 or more months of the year.

Until 15 years ago, Cabarete was mostly known as the best place in the Caribbean for a windsurf holiday, but when kitesurfing started to take off in popularity around 2000-2001  many windsurfers converted to kitesurfing. Why? because kiteboarding is an exciting healthy watersport, and even though it looks like a difficult and dangerous sport, it is actually a relatively easy and safe sport to learn.

Why do so many people choose Cabarete as the place to learn this new sport?

For kitesurfing to be enjoyable you need a steady ( not gusty) wind in the 15 to 25 knots range, which is exactly what Cabarete has.

WHERE TO KITESURF IN CABARETE

The upwind half of the bay is more used by windsurfers, so if you are kitesurfing here, try to stay out of their way. Starting at Ocean One ( in the middle of the bay) the kitesurfing starts since there's no wind shadow from the point. It's a large open beach, easy to launch your kite. Good for riders of all levels.

This is also the beach where most years the Cabarete kitesurf world cup is held. ( although cancelled unfortunately for 2014)

Dangers: Can get a heavy shore break in front Of Laurel Eastman kiteboarding school, if this is the case walk upwind and launch in easier conditions.

Other dangers include Dominican riders showing off very close to the shore. 99% of them are world-class and know what they are doing, just be careful with the odd one that doesn't have the kite skills yet. 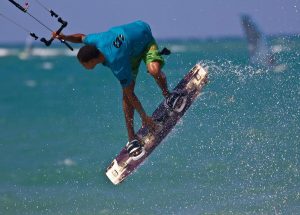 The locals guys showing their kiteboarding skills at Cabarete beach

Dangers: Inside the reef can get crowded. The reef is pretty shallow with urchins and fire coral which is pretty unpleasant if you touch it. In summer ( july and August) the beach gets pretty small because of seasonal erosion so be careful with landing your kite. Plenty of kitesurfing schools and places to rent kites from to be found here.

is about 4 km ( 2,5 miles) west of Cabarete. It's the most consistent surf spot for surfers in the mornings, but for kitesurfers that like waves, it's also a popular spot to ride in the afternoon. Lots of kitesurfers take downwinders from bozo or kitebeach. There are a few spots between kite beach and Encuentro where you want to make sure you do NOT drop your kite, since there's no beach, just very sharp rocks.

Dangers: Small place to land and launch your kite. Urchins on the reef are unpleasant. When doing a downwinder keep in mind that the wind is always 2-5 knots lighter at Encuentro.

No kite schools or rentals are found at Encuentro.

6 km ( 4 miles) east of cabarete. A flat water rivermouth / lagoon. Ideal for flat water freestyle training. It's a nice place to kitesurf when there's only a few people there.

Dangers: lack of space, relatively small so a maximum of 3-4 riders at the same time. 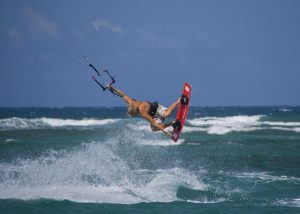 What is the best equipment for kitesurfing in Cabarete?

When the tradewinds are present, expect the wind to start kicking in at around 1 in the afternoon, reach max strength at around 3. Average wind strength is around 18 knots, so for and average kiter that weighs 80 kilos (175 pounds) a kite size between 8 and 11 m2 will be most used.

Type of kiteboard depends on your riding preference . There are a few kiteboards shops in Cabarete to replace something if it gets broken. Starkites and Bic Carib center are your best places to go to. Although the schools also sell kites , boards and accessories.

We use windguru to forecast the wind for Cabarete. Windguru also has a good option to look at Historic wind conditions over the years, to see which months have the best wind average.

Our experiences is that the following months have the best chances ( 75% of days with over 15 knots): June, July, August, December, Januari, Februari,March, April and May. the months of September and October can be a bit of hit and miss, since there could be some tropical hurricane activity somewhere far away over the atlantic that disrupts the tradewinds. 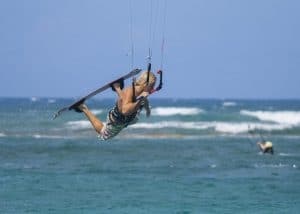 There are at least a dozen kite surf schools in Cabarete. One mistake that a lot of beginners make is to start shopping around for the cheapest kitesurf school.

Some schools offers lessons that are half the price of other schools, why? Because they use dated and old equipment and the lessons are taught by unqualified instructors.

In our opinion the oldest 2 schools in Cabarete are also the safest and best schools: Laurel Eastman kiteboarding( LEK) & Kiteclub at Kitebeach.

We ( the owners of Swell) love kitesurfing, we have been kitesurfing for over 10 years ( we learned in Cabarete) and we still love the riding conditions that cabarete offers,they are the best in the world. We have kitesurfed in lots of places around the world, but have yet to come across one town that offers such varied kite conditions as Cabarete does. 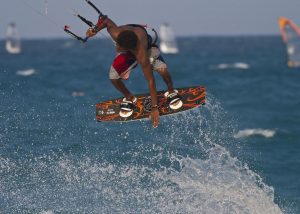 Swell is a surf camp, but we don't just focus on surfing. A large part of our clients do a action sport combo package ; surf in the morning and learn to kitesurf in the afternoon. If you are interested in learning kiteboarding on your holiday, have a look at our kitesurf packages, or feel free to send us an email and ask us some questions.

More info on Swell website regarding kitesurfing in Cabarete:

We hope to see you on the water soon.