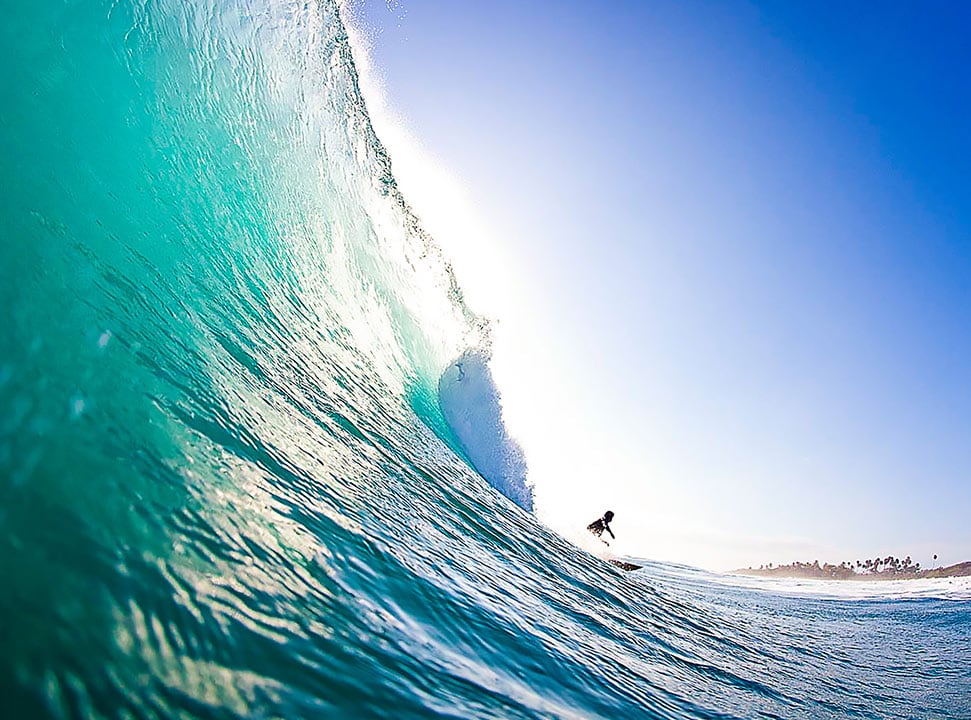 Decades have passed since surf travel has required reading nautical charts, packing weather radios, and crossing your fingers that your destination had some trace of swell. Gone are the days of surf exploration, where any hidden stretch of coastline could possess the often sought after—yet rarely found—perfect wave. Today, we open our phones and we are able see what the surfs doing anywhere in the world in a matter of seconds.

Regardless of the local of your session, surf trip or not, getting skunked burns the same. Surf and weather forecasting might be the most advanced it has ever been, but it will do no good if you’re not quite sure how to read a forecast. Can you say without a shred of doubt that you understand the relationship between swell interval and wave size? Do you know what swell directions the best for your local break?

Can you track a swell originating halfway around the world until it makes landfall on your coast? At Swell Surf Camp, we want you to prepared and knowledgeable surfers, whether you’re surfing at our Caribbean surf resort, or at your home break. Keep reading to learn how to read and interpret surf forecasts and you’ll be sure to score on your next trip down the coast or across the world.

Wave height, it’s pretty self explanatory . Simply put, it is the height of the wave. Understanding the mix of variables that affect a wave’s height will improve a surfer’s ability to read a forecast, and ultimately lead to catching more waves. First, it is important to know that the forecasted wave height, and the height of a wave’s face are typically different. Waves are measured from the top of the peaking swell, which is not the same thing as the face. So, a 2-foot forecast on an offshore day, with the right ocean floor contour, can produce a 3 to 5-foot face.

The forecast might read 2-3 feet, but the waves face could easily be head high.

Failure to comprehend and properly read swell interval can lead to missing a solid surf session. Swell interval is defined as the time that passes between two waves, typically measured in seconds. Swell interval has a direct relationship to wave size in that a long interval will produce larger surf.

The concept is simple. If a wave has a long interval, it has more time to build in size. Thus, along swell interval or period —as it is often called— will create bigger surf than a short interval on with the same size swell. Longer interval swell will also produce more powerfull breaking waves.

A swell traveling from south to north would be labeled as a south swell. How swell direction affects wave quality depends what direction the coast/ break is facing and the wind direction. If a beach is facing southwest and the incoming swell is a northwest swell, the resulting conditions will most likely be choppy.

The most common Swlel direction on the North Coast of the Dominican Republic is North East, but in winter time when stronger storms are off the coats of New Work it will send waves down to the North Coast of the DR in a good North Swell. A typical North Swell in The DR will be 6 foot in height with a 13+ second interval, resulting in waves overhead to double overhead in Cabarete

If the wind is blowing offshore, however, it will prop up the face of the wave and create clean surf conditions.

Regardless of what direction the wind is blowing, high wind speeds will create more difficult surfing conditions. A gentle wind is an ideal scenario for surfing. If the wind is blowing onshore, but only at a speed of 3 or 4 mph, then the conditions will most likely still be clean.

Even if the wind is directly offshore, high wind speeds will make it difficult to drop into waves.

While some breaks work at all tides, not all breaks are created equal. In the same vein, some breaks work well at high tide and others exclusively at low tide. The deciding factor has to do both with swell/ wave size and the ocean floor contour.

For example, certain reef breaks may only be safe to ride at high tide because the reef could be exposed or too shallow at low tide. Similarly, some sand bars may be too deep to effectively cause waves to break during high tide, but they may work well during low tide.

Fortunatly for us, there’s very little tidal change on the beaches of the North Coast, so you can surf in all tides

While the wave type of any given break does not fluctuate and is not technically part of your daily surf forecast, it is usually included in a small section to help you better comprehend how the wave breaks on any given day.

There are three main wave types: beach break, reef break, and point break. Each wave type can produce a left, a right, or an “A-frame” depending on the set up of the break.

A beach break is the ideal learning setting for any beginner surfer. Beach breaks have sand floors, meaning that they have surfers who hit the bottom have a low risk of injury. Waves break over sand bars (rather than reefs), which can shift significantly during a day creating several peaks.

Additionally, wave energy pounds into the sand and has nowhere to go but up and out, which creates an arduous paddle out during a large swell.

A reef break is any wave that breaks over some type of submerged rock formation. There are a variety of types of reef breaks, some of which are beginner/ intermediate friendly and some of which that are advanced only.

A submerged reef break is not a live coral reef, the ocean floor is made up of rock that has been covered by sand. While you don’t’ necessarily want to get slammed into a submerged reef, you won’t hurt yourself by walking on it.

Coral Reefs are, are full of, living organisms. Coral is sharp, simply stepping on coral can cause injury. Additionally, many coral reefs can be full of sea urchins that’ll ruin any surfer’s day. Coral reefs, regardless of the depth of water at the break, should only be surfed by intermediate to advanced surfers.

Similarly, rock reefs can put a serious damper on your day if you come into contact with them during a wipeout. While the rocks may not be sharp (they often are though), they may still be riddled with sea urchins just waiting to impale you. Depending on the depth of water over the reef, rock reefs should only be ridden by intermediate to advanced surfers.

Point breaks cater to surf progression. Point breaks are generally slow breaking, mellow rides that often offer up ideal sections for carving and turning. A point break is caused by an obtrusive land or underwater mass—often rock— that runs perpendicular to the wave/shoreline.

The protruding mass will cause the peak of the break to present itself at roughly the same place every single wave, which can crowd the lineup, but offers workable sections for intermediate surfers looking to improve.

Armed with the newfound knowledge of an amateur meteorologist, you are ready to take to the sea, plan your next surf trip to Swell Surf Camp, or drive down to the coast to catch some waves!

WAVE FORECASTS FOR THE DOMINICAN REPUBLIC

The surf forecasts we use the most in Cabarete are Magicseaweed (opens a new window) and Windguru (opens new window) which is very reliable for wave and wind forecasts for surfers and kitesurfers.

In need of good waves?

At Swell we provide Learn how to surf holidays for people that have never surfed before as welll as a great social place to stay for advanced and expert surfers looking for a cool, comfortable & social place to stay. We offer full packages which include:

We hope to see you in the Dominican republic soon