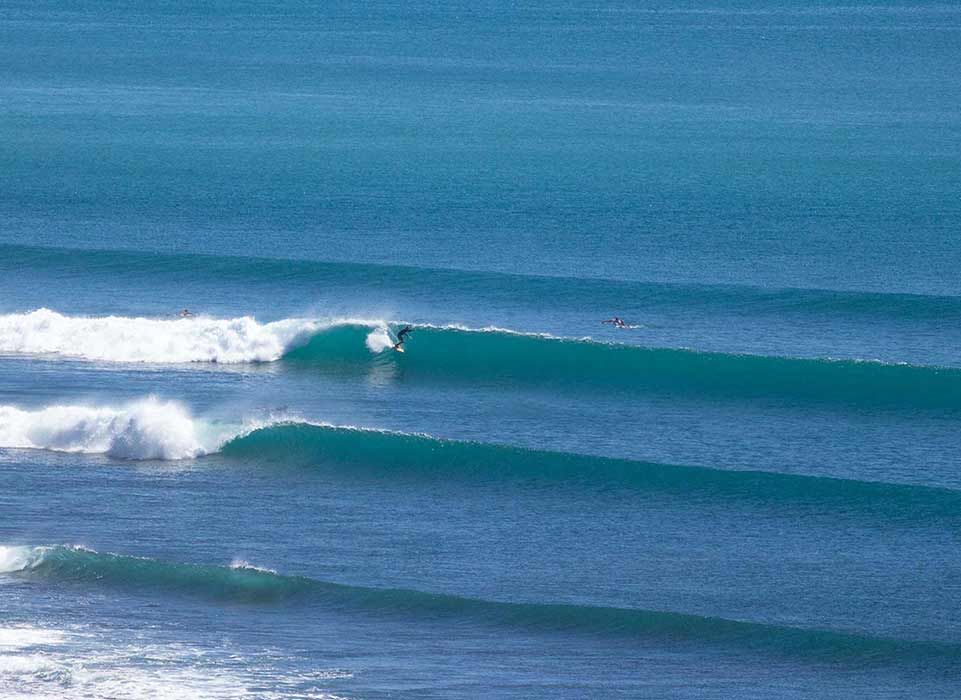 Topics covered and explained in the Surf, waves, swell and break terminology:

To a non-surfer, a wave is just a wave. In actuality, waves are like fingerprints; no two are alike. The same is true for wave setups; no single break is exactly the same as another one anywhere in the world. In order to improve one’s skills, a surfer must have a firm grasp on wave mechanics and an in-depth knowledge of a variety of different types of surf breaks.

To understand surf breaks and wave mechanics, we must look at how waves are formed by swell and where swell comes from.

The sun is the origin of all surf. Solar energy creates wind, and winds blow across vast areas of open ocean to create energy that eventually organizes itself into swell.

When swell travels great distances or combines with other swells, it can increase in size and interval. There are two types of swell that cause surf, groundswell, and wind swell.

Groundswell is the type of swell surfers hope and pray for; it often creates large and powerful surf.

Groundswell is created by large storm and weather systems or strong wind blowing over long distances of open ocean. Groundswell can travel for thousands of miles, and the wave energy can reach up to 1,000 feet in depth. Ground swells typically produce long interval swell and large surf once they make landfall.

The wave energy from wind swells do not run as deep, and they only travel short distances across open ocean.

The result is usually smaller surf with a shorter interval.

When swell finally reaches shallow water- whether that be a continental shelf, a reef system, or a sand bar- it is slowed and finally releases its energy in the form of breaking waves.

When swell bends horizontally as it breaks, it is called refraction. Refraction steers swell towards or away from shore. Some coves on the same coast during the same swell can have pumping waves while others are as calm as lakes.

When open ocean swell comes into contact with an abrupt, protruding change in the ocean floor that is surrounded by deeper water- often a reef or sand bar- the swell will bend at its far ends as it turns into a breaking wave.

The center portion of the swell is slowed by the protrusion. The result resembles a bowl shape that travels towards the shore, with the “opening of the bowl” facing the shore.

When open ocean swell collides with a protruding headland, such as a cliff, jetty, or even a pier, the portion of swell confronting the headland slows, while the rest of the line of swell continues forward at pace.

The result closely resembles a “C” shape with the curved side moving towards the shore. This is known as convex refraction, and it nearly mirrors concave refraction in appearance.

Beyond refraction, ocean floor topography plays a role in determining how a wave breaks, not just how it bends. Surf breaks are categorized in three different ways: beach breaks, reef breaks, and point breaks. Understanding the differences between surf breaks is key to not only progressing as a surfer but staying safe in the water.

At Swell Surf Camp, our clients have access to a variety of surf break types that will match their surf skill level. The Dominican Republic is home to a vast system of reef and beach breaks.

If you’re a first-time surfer, it’s best to find a mellow beach break to learn. Beach breaks are typically the safest types of surf break. Incoming swell breaks over sand bars versus harsh rocks or reef.

The shape and size of the wave are directly influenced by the sand bars that are constantly shifting. Beach breaks typically offer a variety of peaks compared to reef or point breaks that might only have one take off zone.

Point breaks, as the name suggests, are waves that break on a point, a protruding land mass that is perpendicular to the wave’s direction.

This point can be natural or manmade, such as a jetty. The wave at most point breaks is slow forming and offers surfers a long ride with a carve-worthy wall. Point breaks are great for surfers who are looking to progress and learn to carve / turn.

A reef break is created by a wave breaking over a rock or coral formation under water. Reef breaks can either have submerged reef or exposed reef.

A submerged reef is a rock formation that has been covered by sand. Submerged reefs are typically safer to surf over than any other type of reef. The exposed reef is often sharp and dangerous to step on. Additionally, reef systems can have other hazards, like sea urchins.

Reef breaks do, however, offer a consistent peak and wave shape that you would not find at a beach break.

In order to successfully catch and ride waves, a surfer must comprehend basic wave anatomy. Where should you take off? What parts of the wave have the most speed? Where is a safe place to wait for incoming surf? All of these questions can be answered by digging a little deeper into the anatomy of a wave.

One mistake many first-time surfers make is paddling for any incoming wave no matter where they are positioned compared to the peak. The peak of a wave is its highest point and the ideal take-off point for surfers. A wave begins to break at the peak making it the steepest portion of the wave and the easiest place to take off.

The shoulder of a wave is a flatter and more mellow section of the wave that sits down the line from the peak. The shoulder is a great place to sit and watch your friends score waves.

While the channel is not technically part of the wave, it is vital to a surfer’s ability to paddle out. Paddling out can be difficult, especially in large surf. The channel is where all of the incoming surf flows back into the sea. This is the best place to paddle out, as it is often calmer than other parts of the break.

The most effective way to learn about waves, different surf breaks, and varying surf conditions is to surf as much and as often as possible. At Swell Surf Camp, we not only teach our clients to surf in the warm Caribbean Sea, but we provide the ultimate surf experience through stellar lodging, tasty food, and a welcoming community.

For 2020 a new destination is offered by Swell: Swell Bali Surf camp will open in Bingin, a very short walk to some of the best surfing beaches that Bali has to offer, catering for people that have never surfed before to people that want to catch some perfect barrels.

Time for a surf trip?

In need of
a surf trip?