Surfboard shaping and design have both changed significantly over the last few decades. Shaping trends are constantly changing. In the seventies, the twin-fin fish began to dominate line ups. Surfers were completely enthralled by the newfound speed and maneuverability of a shorter board. In the eighties, the thruster was designed and changed performance surfing forever. In the nineties and into the new millennium, high-performance boards were long, thin, and completely rockered out for maximum maneuverability. Today, high-performance boards are getting shorter and fatter with an increased focus on the volume under the chest. But what do all these design features really do? How does a board with low entry rocker compare to one with plenty of rocker when you’re actually surfing? What’s the difference in feel between a single fin, a twin fin, a thruster, and a quad? If you’ve ever wanted to know the ins and outs of surfboard design, you are in the right place. From design to function, this article explores all the intricacies of board design 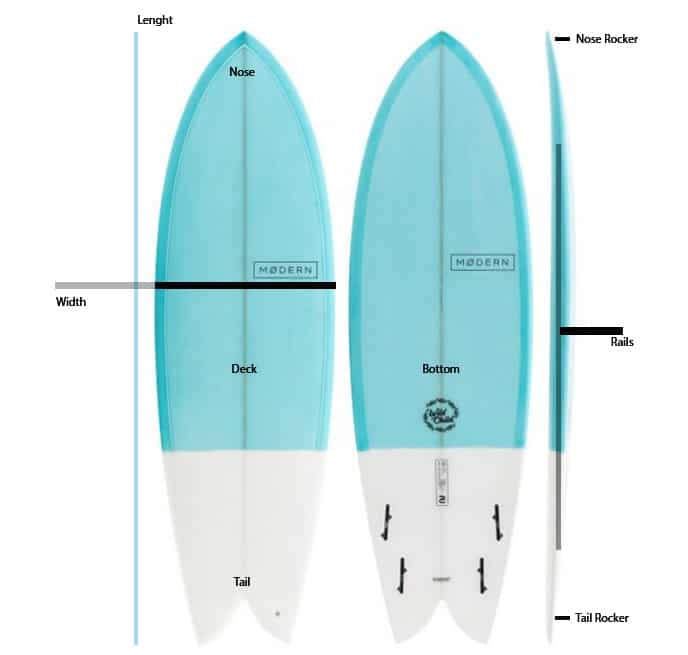 Length is a pretty intuitive design feature. The length is the measure of the surfboard from the tip of the nose to the tail. But there is more to length than one might think. Just a few inches taken or added to a board will create a noticeably different ride. The basic school of thought when it comes to length is that the more length a board has, the easier it will be to catch waves. Surfers may ride longboards on small days, or when the surf is maxing out, they may opt for larger step-ups and even big wave guns for help paddling into waves that would be otherwise too large and too fast to catch.

Width is the measurement of a surfboard across the board at its widest point. Width plays a role in a few different aspects of surfing. The more surface area a board has, the more it will float, the easier it is to paddle, and the easier it is to catch waves. One way shapers achieve this increased surface area without adding length to a board is by increasing width. Small wave grovelers often feature wide tails; this allows surfers to catch more waves. A board with a wide nose might do well in small surf, but it struggles in large surf with steep faces because a narrow nose allows for a steep drop.

Volume has always been an important variable in surfboard design, but it is only recently that shapers and surfers alike are starting to pay close attention to it. There has been a surplus of high volume shortboards coming to market in the last five years. While it may be true that more surface area increases a boards ability to catch waves, it is only true because more surface area adds more total volume. The volume is the amount of space the board occupies: the combination of height, width, and thickness. Today, shapers are paying extra attention to volume and using it to cut inches and even feet off traditional shortboards. By putting more volume under the chest of any board, a shaper is able to reduce the length significantly. With a reduced length, the board becomes more maneuverable.

The tail is the back end of the surfboard. Its shape and thickness directly affect the performance of the board on a wave. The shape of the tail either allows the board to maintain hold on a wave’s face through a turn or release quickly. For example, a rounded tail can hold, but a tail with a wing feature or a swallow tail release the board from the waves face.

Rails are the edges of the board. Rails affect boards speed, planning ability, and tube riding ability. Thick rails, for example, will plane well and allow for a lot of speed. A hard, low rail has plenty of hold to the waves face, perfect for a good tube riding.

Rocker is a term that refers to the curvature of the board. A dramatic, heavy, or steep rocker will be more curved, while a flat rocker will be less curved. A steep rocker at the nose of the board allows the surfer to take steep drops. Contrastingly, a board that has a steep tail rocker or a steep rocker for the length of the board allows the surfer more maneuverability because the board has fewer contact points on a wave and therefore, less drag. High-performance boards often have intricate rockers that allow surfers to perform in steep, dynamic surf. Small wave boards often have flat rockers allowing the board to plane and maintain speed through slow sections of the wave.

Foil refers to the thickness of the board or the distribution of foam from nose to tail. Foil has been a key component of the recent focus on volume. Putting a large amount of volume under the chest requires a combination of added width and thickness. While the thickness of the noise, middle, and tail of the surfboard may weigh heavily on the board’s performance, they allow for increased paddle ease and ability to catch waves.

Fins propel the board forward, dictate the turning radius, create hold on a waves face, and much more. So obviously, fin set up directly affects the board’s performance and feel. While there are a few novelty few setups that have gone in and out of fashion over the years, such as the bonzer or the asymmetrical setup, there are four standard fin setups: single fin, thruster, twin fin, and quad.

The thruster (3 fins) is, perhaps, today’s most common fin set up. When the thruster first appeared on the scene during the 1980s, most surfers were riding twin fins that offered a lot of speed, but not much maneuverability. The addition of the back fin provided surfers enough control to be able to turn on a dime. The thruster set up allows surfers to change direction with ease and carve out massive turns on an open face. This increased maneuverability completely changed progressive surfing and brought about the power surfing style that was popularized in the ’90s.

The twin fin came into popularity during the 1970s with the rise of “the fish.” These unique shortboards, with two fins placed far apart, allowed surfers to reduce drag and increase speed. Twin fins are ideal, and a blast, in small to medium waves where they provide optimal maneuverability and flow.

The Quad fin set up (4 fins) leans heavily on the basic science behind the twin fin, a wide space between fins for water to flow equals speed. However, the extra two fins on the quad provide additional hold, which comes in handy in smaller waves.

Quads with the trailer fin closer to the rails and further up on the board, perform great on smaller waves, like a twin fin but with a bit more control.

Today, most single fin surfboards are longboards, but that wasn’t always the case. Single fins offer surfers long, drawn out, arching turns. The one large fin offers plenty of hold but does not have the maneuverability of a board with three fins, regardless of the board’s length.

The deck refers to the top of the surfboard where a surfer places his or her feet. The most common deck types are domed or flat.

A surfboards bottom contour directly affect speed, turning ability, and style. A hull or convex bottom provides a smooth ride, sits low and the wave, and moves slowly. Contrastingly, a concave bottom offers a fast and maneuverable ride, allowing the board to skip along the surface of the water, push water back towards the fins, and create lift.

While the complexities of surfboard design may fall flat on many riders, the more informed you are on the matter, the more likely you are to be able to find the perfect board for your skill level and style. So, pick out that perfect board and bring it down to our Caribbean surf resort!

– The Swell article surfboard shapes give you more insight into the different types of shapes.
– New to surfing? Read the beginners surfboard guide.
– What is needed to get you into this? Read the surf equipment and accessories page.
– Don’t want to bring your surfboard to Cabarete? See our list of surfboards for rent in Cabarete

Teaching people the sport of surfing in a safe, quick and fun way is what we specialise in at Swell Surf Camp. We have taught 1000’s of people the basics of surfing.

Learn to surf in the Caribbean with us

Interested in changing your life to see the health benefits of learning to surf?

We cater for surfers of all levels, from beginners to expert surfers who are looking for an active surf holiday

A NEW SWELL IS COMING

Swell is in the process of opening a new surf hotel / surf camp in Bali. Located in the Bukit peninsula of Bali, right where the best waves are. 100-meter walk from one of Indonesia’s best waves; Bingin. The same social concept as Swell in The Caribbean, it will have a large open communal area where guests can socialize, hang out and meet fellow travelers. The social aspects of a surf camp, the comforts of a surf resort. Visit Swell Bingin Surf resort