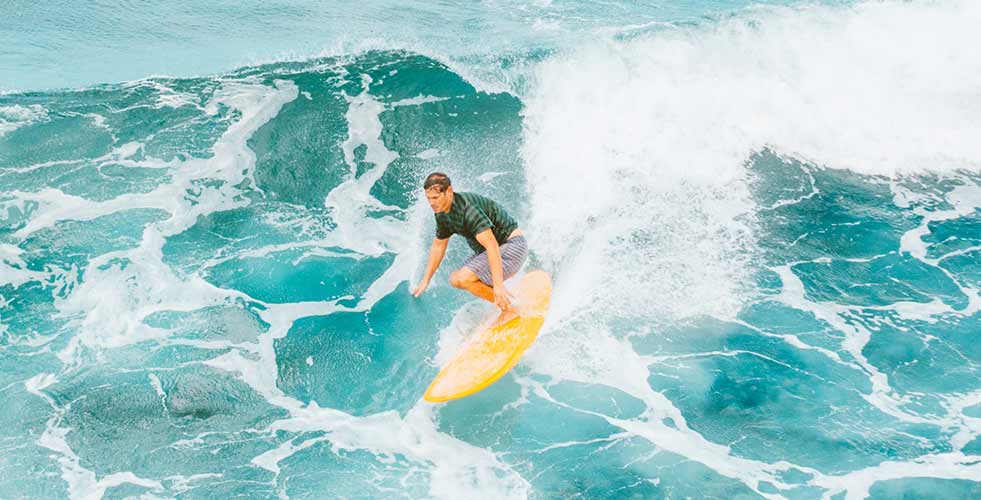 Learn how to discover, catch, and stay on unbroken “green” waves by positioning yourself correctly in the line-up.

CATCH MORE WAVES BY SITTING IN THE RIGHT SPOT!

This article will provide you with a basic understanding of better position yourself to catch green waves. It covers the fundamentals of paddling into an unbroken wave and “sticking” on these “green waves” without nose-diving, passing over the wave, or becoming caught on top of it.

Keep in mind that this is one of the most difficult skills to master as a beginner surfer. Nothing can ever take the place of practice. The longer time you spend in the water and the more waves you attempt to catch, the better.

The theory presented in this article will supplement your practice and, in most cases, will speed up your progress and save you a lot of time and frustration.

Positioning & where to sit

How to locate and position yourself to catch a long green wave:
1. Recognize the various stages of a wave

PHASE 1:  SWELL LINES
It is only a bump in the road. At this point, catching this wave is impossible. This lump is merely a forewarning that a wave is on its way.

PHASE 2: UNBROKEN WAVE
This is the place to look for a “green wave.” This waveform is great for paddling because it is unbroken and has the right strength and steepness. You can’t catch at phase 1  because it isn’t steep enough, and phase 3 is too vertical for you to take off. ( better surfers with shortboards can take off here)

PHASE 3: BREAKING WAVE
The peak of the wave has arrived. On the flat water, the lip is already beginning to crash down. The wave is too big and steep to catch at this point, especially for inexperienced surfers.

PHASE 4: WHITE WATER
The wave has broken and has turned into a whitewater wave.

Real-world example of the different phases of waves 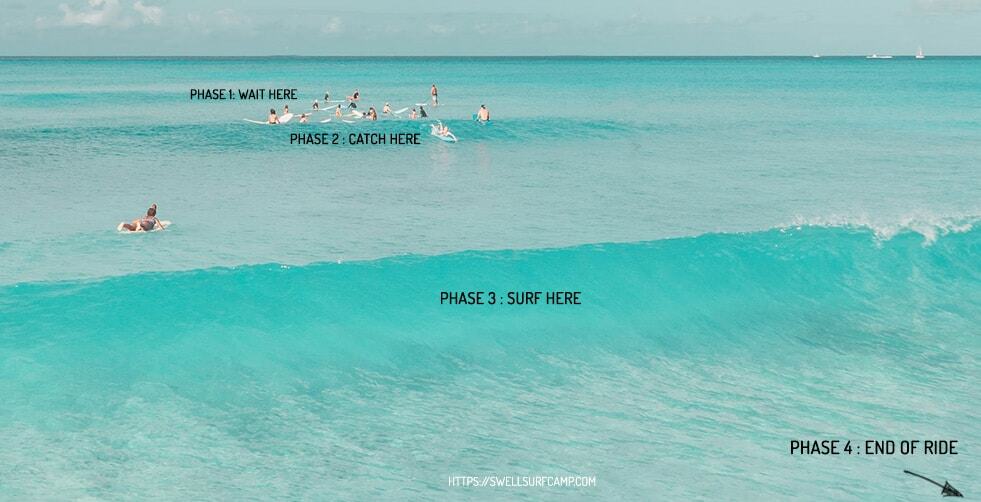 Prepare for a Green Wave by putting yourself in the right place.

Sit around 4 to 5 meters (15 feet) away from the majority of the waves.

The reason for this is that if you are waiting at a specific location where a large number of waves are breaking, the moment you turn around and paddle for a wave, you will either be catching a white water wave that has already broken, or you will be getting the wave crashing on top of you.

A good spot to take off, not too mellow / not too steep.

What is the status of the more experienced surfers? They probably know more about where to sit in line than you do.

This does not imply that you should sit next to them and wait for their waves. It’s merely a guide to help you figure out how far out you should paddle.
Where to sit is also variable on a couple of different aspects:

Beginner surfers are frequently found sitting much further out from the wave than more experienced surfers. This doesn’t make much sense; either the waves aren’t breaking as far out that day, or they aren’t breaking at all.

In other words, if you see waves breaking a long distance away from where the expert surfers are sitting, this indicates that it is an “unusual” and larger set of waves (which you most likely do not want to catch as a beginner surfer!).

Look for lumps on the horizon. A “phase 1” wave that will transition into a “phase  2” wave roughly 3 to 5 meters behind you is what you’re searching for.
Choose a wave, turn around, and paddle for at least 8 hard strokes. You should paddle hard enough to keep up with the wave’s pace as it transitions from “Phase 1” to “phase 2.”

KEEP LOOKING
When paddling for a wave, look behind your shoulder. Taking a couple of glances behind you is the only way to determine whether you need to paddle more, paddle less, or even stop paddling for a short period, depending on the shape of the wave.

It also prevents you from “dropping in” on individuals (for further information on what this means, see “Surf Ethics”). If you glance behind you, you’ll be able to tell if the wave was too steep (phase 3), too weak (phase 1), or just right (phase 2), and hence why you failed or succeeded in catching an unbroken wave.

Many inexperienced surfers fail to look back at the wave and end up paddling incorrectly. They either get smashed by the wave or catch a white water wave. Without looking back and understanding what happened, you will never be able to learn from your mistakes. 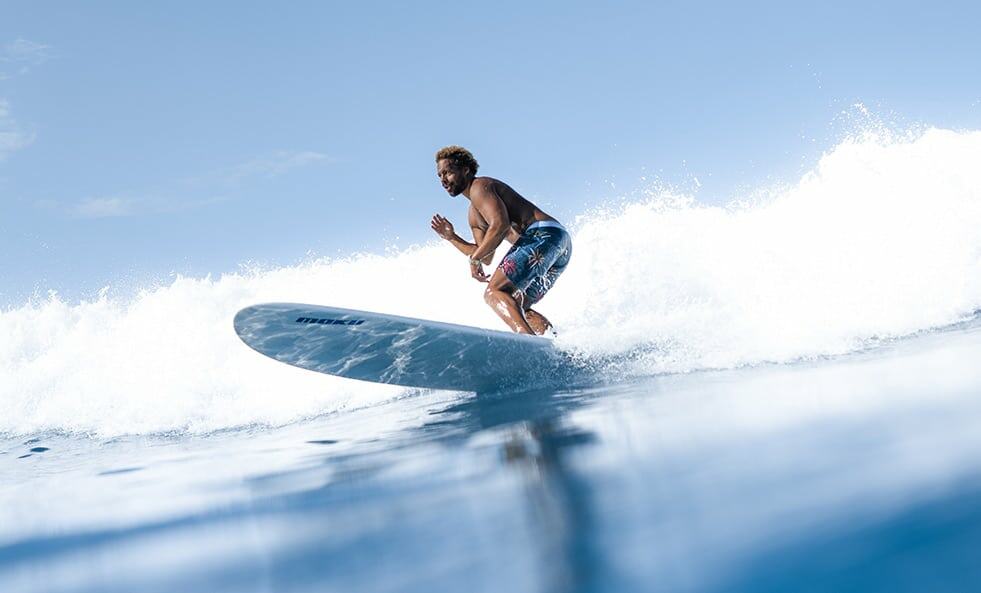 A BIGGER BOARD MAKES A DIFFERENCE!
It will be easier to catch unbroken waves if you have a larger board.

PADDLE SPEED
Paddling fast enough to match the speed of a wave is the key to catching “green waves.” You will spring up and surf faster if you can “capture the momentum” of the wave. Green waves are easier to catch on big boards than on small boards because they paddle faster.

It will get easier to paddle around and position yourself to catch unbroken waves the more experience you gain in reading waves. The more proactive you are, the more likely you will be to catch waves. See “How to Read Waves” for additional information on wave reading.

Catch and “Stick” on a wave that isn’t broken.
White water waves differ from unbroken waves in the following ways:

Most whitewater waves may be caught without even paddling.

How to “stick” to the unbroken wave without getting swept away?
Long, forceful, and deep strokes should be used when paddling. This is especially critical when catching waves that aren’t broken.

When paddling, you must give everything you have, especially when you feel your surfboard’s tail rise: this is a crucial moment to “Stick” on it.

The way you stand on your surfboard is crucial. As we saw in the How to Paddle on a surfboard article, excellent paddling technique is achieved through precise paddle strokes and optimal body placement on the surfboard.

When your chest is exactly centred on the width of the surfboard, and you are at the correct height, you are in the correct position on the surfboard. Place your body high enough on the board so that the nose is about 3-6 centimetres (1-2 inches) out of the water while keeping your head up (imagining a soccer ball between your chin and the surfboard). 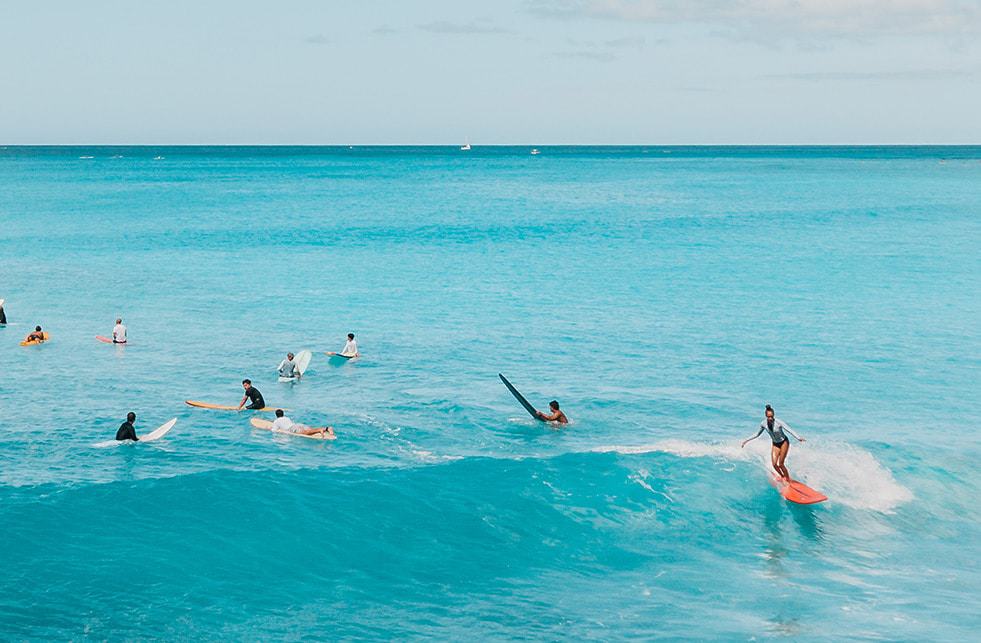 Your head and upper shoulders are likely to weigh 45 pounds (20 kilograms) or more! Consider how much of a difference it makes when you drop your head and bring it closer to the surfboard when you’re pulled up on a wave. This allows you to catch, stick, and descend the “slope” that is moving forward.

Many kids become accustomed to being pushed into unbroken waves by their trainers, which is beneficial for practice. When you’re pushed, however, you don’t have to lower your head to put weight on the front of your surfboard. If you’re disappointed because it’s difficult to catch green waves without the help of a surf coach, remember that shifting your weight towards the surfboard is the key to catching unbroken waves on your own.

It would help if you popped up at around 2/3 of the height of the wave. Once you feel your tail lift and you believe you have gained enough speed to continue gliding with the wave, give two final paddle strokes, place your hands on the board beside your pectoral muscles, curve your back, and jump!

Teaching people the sport of surfing in a safe, quick and fun way is what we specialise in at Swell Surf Camp. We have taught 1000’s of people the basics of surfing.

The Caribbean: On the North Coast of the Dominican Republic 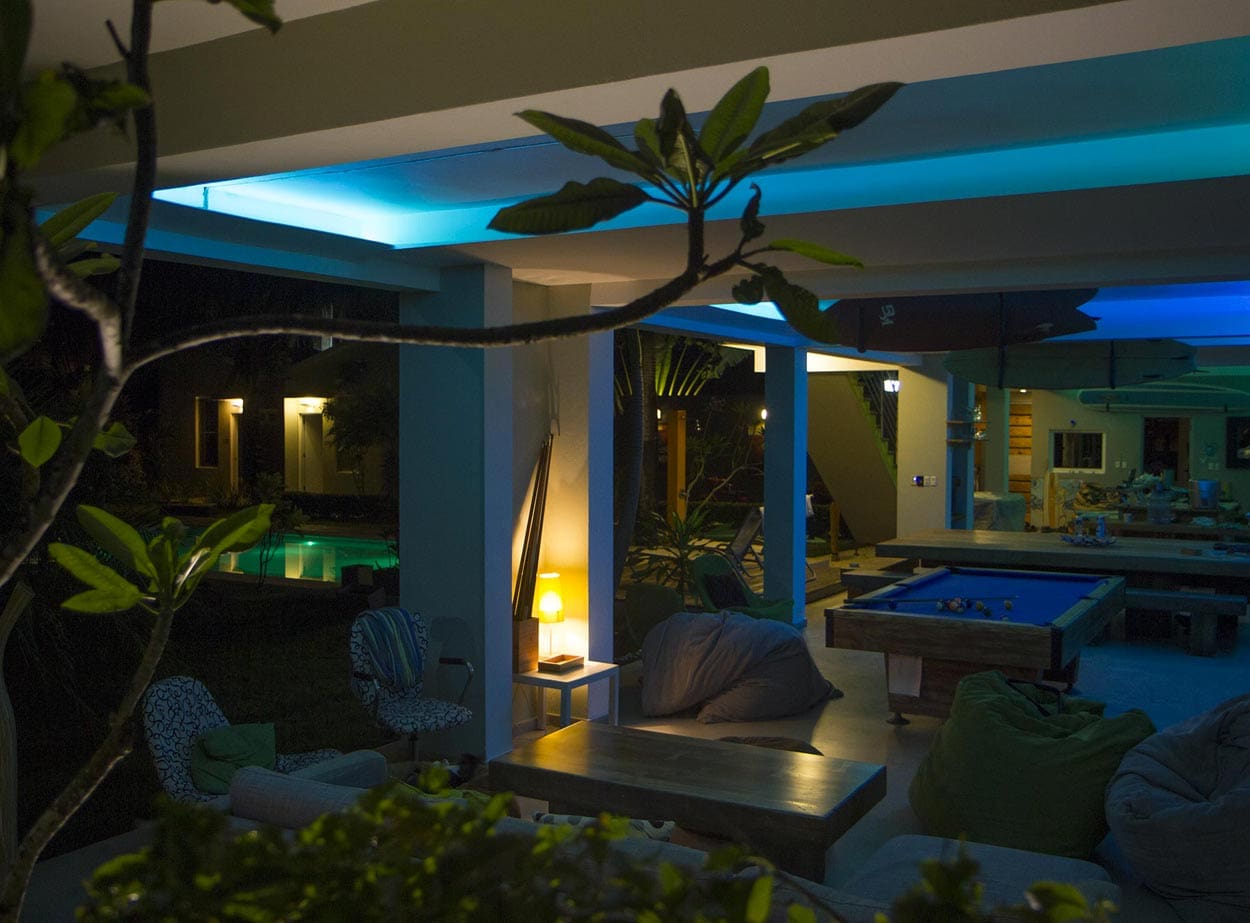 Interested in changing your life to see the health benefits of learning to surf?

Send us a message today and we’ll get you up and riding!